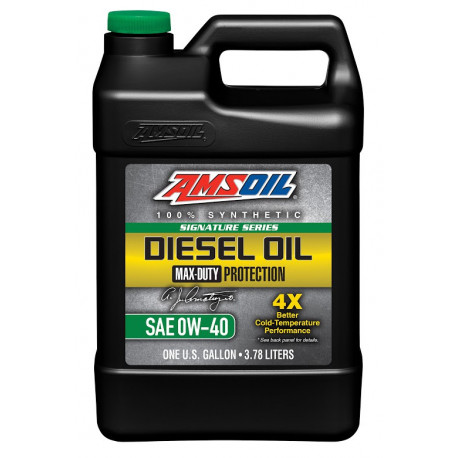 Minimizes Oil Consumption
AMSOIL Signature Series Max-Duty has a low rate of volatility (burn-off), reducing oil consumption during operation and passing less oil vapor into the combustion chamber. It provides up to 76 percent less oil consumption than required by the API CK-4 standard in the Caterpillar-1N oil consumption test.

APPLICATIONS
Use in diesel engines and, where appropriate, gasoline engines requiring any of the following specifications:

COMPATIBILITY
AMSOIL Signature Series Max-Duty Synthetic Diesel Oil is compatible with other conventional and synthetic engine oils. Mixing AMSOIL diesel oils with other oils, however, will shorten the oil’s life expectancy and reduce the performance benefits. AMSOIL does not support extended drain intervals where oils have been mixed.

Aftermarket oil additives are not recommended for use with AMSOIL synthetic diesel oils.

Drain intervals may be extended further with oil analysis.

1Refer to your owner’s manual for OEM drain interval recommendations and guidelines for severe and normal service.