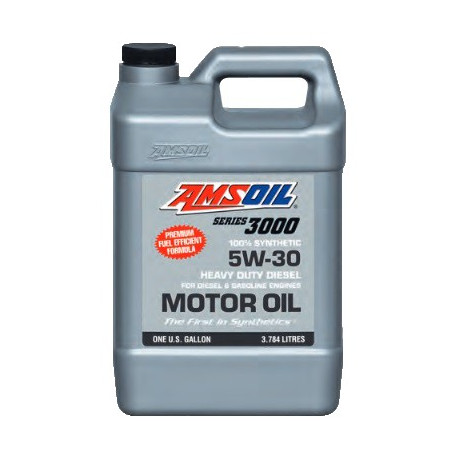 AMSOIL, the leader in automotive synthetic lubrication, produced the world's first API-qualified synthetic motor oil in 1972. Trust the extensive experience of AMSOIL, The First in Synthetics® to do the best job protecting your engine.

Controls Soot-Thickening and Wear
AMSOIL Series 3000 Diesel Oil is heavily fortified with detergent/dispersant additives and is naturally resistant to soot. It is designed to keep soot particles suspended independently and prevent them from attaching together to form larger, wear-causing particles. Viscosity increase is minimized and soot-related wear is controlled.

APPLICATIONS
AMSOIL Series 3000 5W-30 Synthetic Heavy Duty Diesel Oil is recommended for diesel engines, including those that are trubocharged, gasoline engines and other applications that require any of the following specifications: